Below is a lengthy conversation I had with one of my readers and it deals with a common question, which is better the Sole F80 treadmill vs. the NordicTrack Commercial 1750 treadmill.

Read Another (Shorter) Comparison Between the NordicTrack Commercial 1750 and Sole F80 here.

This is the reader’s question and eventually my response…

Hi,I am a huge fan of your site & your actual YouTube reviews, which I have watched countless times [going back and forth between the treadmills I like most]   THANK YOU for posting those!  It is my understanding that you worked for Smooth Fitness?  To me that gives your credibility even more kudos, as you don’t seem to “push” or “pedal” one manufacturer over the other, as it seems most other review sites do.

I have a loaded question:  having done my research, read countless reviews, etc, I am shocked that I am looking at 4 (maybe 3) VERY completely different treadmills…all for different reasons, frankly I like the simplicity of the Nordictrack I had years ago.  I am not interested in iFit, I would prefer to not have attached HDTV’s or gadgets on my treadmill that will be a waste of space.

Skip Down to Our Response:  NordicTrack Commercial 1750 or Sole F80 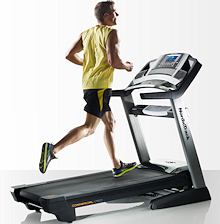 I am not a runner [at all],  I walk-jog and I use the incline intermittently (and manually by choice) according to my music.   I never used iFit on my last treadmill, nor have I used programs on either of the last two.  (an older Nordictrack commercial & a 2011 sole F63 that I sold)  so really what I am looking for is a user friendly (not overly complicated console with well laid out or user friendly access to manual speed & incline) a treadmill that is easy on the joints (my knees and splints…..owww) quiet (by this I mean that if I want to get on at 3 am the noise of my feet on the deck will not sound like I am stomping, as it has on the treadmills I tried out in person at Dicks, Sears, and Sports Authority)  and is dependable.

I was leaning toward the Elite Nordictracks at Sears, but they always seem to have clicking noises or console malfunctions in the stores…all three of the higher end Nordictracks, the elite 3700, 5500, and 7700 had issues at EVERY Sears showroom.  I am considering the Nordictrack Commercial 1750 treadmill from their site [not Sears] but am nervous about EVERYONE warning about customer service issues, reading between the lines of the extra warranty offered is a concern.  If I do get their new 1750 that you recently reviewed on YouTube, should I get their extended or “extra 360” warranty?  User reviews say don’t bother, as they are the WORST company to deal with once your treadmill is delivered. 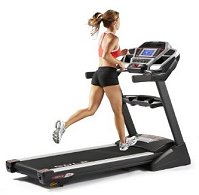 The second treadmill I am considering is the Sole F80 treadmill.  My experience with the F63 that I had was that it was very well built, I had no worries about cheap plastic parts, etc.  The only reason I sold it was because we were moving, I didn’t want to worry about how to get it in and out of the new (and old house) gyms.  I am not sure if it was just mine, but although it was quiet and rock solid, I had trouble seeing the blue display and sometimes I questioned if the display was accurately reading out my speed and incline (which is imperative as I don’t want to have a heart attack)   I see they remain one of the top reviewed treadmills in almost every price range and site.

I tried to contact them to see if their were any new or updated models since the 2013 ones that they have at Dicks, on Amazon, and on their site, but I still have not gotten a response.  Granted they are free shipping and 30 day guarantee, but I don’t want to buy one and have a new model show up right after I purchase it.  Are you aware of any updates to the F80 or F85 since the 2013 models?  I saw one on ebay in a box saying the “new 2014 model”????  I’d rather pay more for an improved [brighter] display of any other improvements as this treadmill does hold up on resale value if I don’t love it or the display in still an issue.

And the 3rd choice is the Yowza line.  The Yowza Boca treadmill I saw on your site and I was enamored by your review & the refreshing models that I have never seen.  If their treadmills are indeed superior cushioning, their customer service is dependable, their technology looks striking.  I have the same 30 days free shipping as I would with the Nordictrack 1750 and the Sole F80 but they are in Florida (as am I), and they also send theirs out via expedited 2 day [free] shipping, which is highly appealing.  Nordictrack said their window of delivery is approximately 2-3 weeks from date of ordering.  And they are offering a “free” Ipad air tablet.  I know they worked it into their price, of course, but nevertheless…  and their shipped treadmill is basically preassembled, so I wouldn’t have to pay the additional $268 to Nordictrack for their assembly.

So….I just wrote you a novel on accident, I am so sorry, and I hope that you do read this.  I have read every review, seen every video, and in some instances tried in person every treadmill possible sold in local stores.  I would rather pay more and have peace of mind that my treadmill and patience and endless research was for a good investment.  Please please tell me if [given what I will use and or don’t want]  ie- if it comes with ifit, fine, i simply won’t use it.  a tv in my face…that would bother me.  I listen to music (on my stereo) to keep me motivated, and somehow I end up dancing or doing aerobics when I get bored so my body will keep going and my mind can wander.  I am on the computer enough, and I don’t watch TV ever.   I have referred to your site since narrowing down to these 3, but I am begging for your advice as you have reviewed them all highly and I don’t think that I fall into the typical consumer based on what I REALLY WANT and what I will ONLY USE.  I would say that money isn’t an issue, but I’ll say that my budget is comfortable at $2000, so I don’t want to skimp on cushioning, plasticy parts, belts that thud when you run on them….

oh…last thing, I promise.  #1:  the Yowza Boca treadmill you reviewed has a 3.5  HP DC motor, not 2.75.   That was almost a deal breaker for me between the other 2 until I looked at their specs more closely.  The belt is 20″ x 63″.   Your page and reviews are the best, even more so than Consumer Reports, who I once relied heavily on for most of my big purchases.

Your videos are exceedingly helpful.  (if I didn’t already somewhere in this long email say it…THANK YOU!!)    I wish that I lived by you because I think the one thing that I personally would like to see on any videos is a treadmill shown going at full speed and incline, even if only for a minute, to listen for whistling or noises that I have found on the ones I have tried in person.   To hear how loud the buttons are beeping, to see if continous (as the brand new nautilus T616 and Schwinn 870, both of which are BRAND NEW and almost IDENTICAL in every way but color and name)….because I have been so indecive I thought I would settle for either of these 2, great reviews, great specs…until I heard the continuous beeping on a user review that is very loud.   Between your knowledge and experience and my OCD as a consumer I think we could monopolize the review sites that are misleading and almost definitely getting some kind of kickback for steering people like me away from some notables and directly toward where they are paid to send me…

If only I had thought to keep all of my videos in the stores of all the treadmills I have tried in person over the last 2 years!!!  (I kept these for myself for reference so I wouldn’t have to remember what I did or didn’t like and from where….maybe if I find them in my photobucket maybe I will post them, along with 100 mattress reviews

thank you, and I hope to gosh you read this and mea culpa for making it so long…

You currently hold the record for the longest email I have every gotten from one of my readers!!!

Thanks for the heads up on the Boca treadmill.  It appears they recently changed the specs.  Particularly the warranty, which was increased to 10 years parts.

Where do I start.  The Boca is a very good choice for durability and shock absorption.  The shock absorption is very forgiving, although some hardcore runners may feel it has too much bounce.  There is one major drawback, and that is you cannot try it.  Actually a version of the Boca was sold as a private label for Smooth (Note: Smooth went out of business and a company bought just the web site.).  The Smooth version had a very good track record.  And Yowza, being relatively small, has a more responsive customer service.

Be aware that any of these free trial periods don’t mention that you have to pay to send back the machine and it has to be broken down and repackaged.

Regarding the NordicTrack treadmills.

They are all good machines and tend to hold up well.  I have a earlier version of the NordicTrack C990 and over the last four years have had no issues.  However, their customer service does tend to have issues, particularly during the busy winter season.  I was just out there last November and the customer service department is a sea of desks, some of the employees are full time others are part time students.  Although one of the reasons NordicTrack gets a bad rap with their customer service is because of the shear number of sales and the overload of customers needing assistance.  It is better than it was.  One thing to consider with a NordicTrack treadmill is that you are paying for bells and whistles that you are not planning on using.

Which makes me suggest you go with Sole F80 for several reasons.

First, when I went out to their offices the partners mentioned that they put their money into building the most durable machines on the market minus the frills.  And I would tend to agree with that.  Second, being a smaller operation their customer service does not get overwhelmed, and they probably have less service issues.  Finally, you can go to Dick’s and try one and determine if the shock absorption meets you criteria, and if the sound level is acceptable.  I get people asking me which treadmill is the quietest and that is hard to answer.  I never have tested them with a sound monitor.  Some I test on retail floors, others in show rooms and some in studios, which means it is not a controlled environment.  I do believe the Sole treadmills are relatively quiet.

So I hope that gives you some direction.  I would appreciate if you could Google + my site and/or a Facebook Like.  www.treadmill.local.