Is Running Barefoot A Good Idea?

The Pros and Cons of Shoeless Running

A few weeks ago, my sister and I took a trip to the coast for a few days. We woke up the first morning and my sister asked if I wanted to go for a run. Running in new places is always an extra motivator for me, so I quickly said yes – I imagined running alongside the ocean and listening to the waves at sunrise…but as I went through my suitcase looking for my running shoes – I realized that I had forgotten to pack them.

But, determined to make that idealistic beach run come true, I decided that I would just run without shoes – after all, we were going to run on the beach, not through the mountains – how hard could it be?

So, we walked down to the beach – me in my sandals, and my sister in her $120 Asics running shoes. I kicked off my sandals and we started running. Besides running around in the grass at the park or playing soccer on the beach, I had never actually gone on a run barefoot. And there I was, running barefoot on the beach, listening to the sound of the waves, and feeling the cold sand under my toes. It felt great!

Until the day after, when I was so sore, I could barely walk. I think it was the combination of running barefoot for the first time, running with my sister (who’s a Speedy McGee), and running on the sand. That being said, I did enjoy running barefoot on the beach, and did it a couple more times on that trip.

You’ve probably heard about barefoot running before – maybe you’ve even tried it yourself. Barefoot running has been around for millions of years, actually. The concept became more well-known in 2009, when Christopher McDougall’s best-selling book, Born to Run became popular. The book argued that running shoes actually caused injury, and that, as humans, we are genetically engineered to run long distances. (1)

But before McDougall’s revolutionary book, people had already been running barefoot for centuries. In fact, in the 1960 Olympics in Rome, Abebe Bikila of Ethiopia won the Olympic gold medal in the marathon with a world-record time of 2:15:16.2. And he did it barefoot. (2)

The history of barefoot running is the history of human evolution, because after all, humans have been walking around and running around barefoot since the beginning. Today, there are still many tribes and groups of people that run shoeless.

McDougall’s book talks about the Tarahumara tribe, who ran 150+ miles at a time – and fast. All without today’s extra-support, cushioned, aesthetically-designed running shoes. McDougall says that “they essentially run barefoot or in sandals and experience very little in the way of injury” (3).

The main draw for running barefoot is that claim – if you run barefoot, you’ll experience less injuries. But is it true? Are running shoes the culprit?

Get Rid of The Shoes – And the Injuries

Most running shoes are designed with a lot of heel support. That’s because when most people run with shoes, their heel is the first part of their foot to smack the pavement. This heel striking running method isn’t the most effective, nor the most natural way to run.

When you run barefoot however, your heel is not the first part of your foot to hit the ground (if it did, it would hurt a lot). Barefoot runners learn to land on the soles of their feet rather than on the heel. This allows them to develop a more natural gait, and also strengthens muscles, tendons, and ligaments in their feet. (4)

When you get rid of all the extra padding and heel support in your shoes, it allows your calf muscles and especially your Achilles tendon to stretch and lengthen, and that makes you less likely to experience injuries.

Also, by using a correct running technique, you teach yourself to connect with the ground and to run lightly and gently. It also improves your balance and awareness of where you are running, and how you are running – making it less likely that you’ll twist your ankle or wreck your Achilles tendon.

A Free Coach That Teaches You How to Run Well 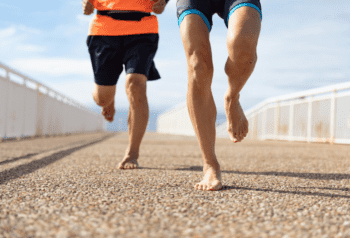 Daniel Lieberman, a well-known Human Evolutionary Biology professor at Harvard, is a big supporter or barefoot running. His studies of human evolution are eye-opening. In a recent interview, he shared that “barefoot running requires people to run lightly and gently. And of course, that’s how we evolved to run. I don’t think you need to be barefoot in order to run well, but I think it’s like a free coach and it can give us some information.” (5)

He says that running is a skill, and the problem is that today, people aren’t taught how to run. If you think about it, it’s true. Running is seen as something anyone can do, just get out there, and run! But, running without proper training can lead to problems, like foot injuries, back pain, sprained muscles, and endless other issues.

Running well takes practice. Learning how to run lightly and gently and run on the soles of your feet rather than your heels – it all takes an adjustment. But, like Lieberman says, running barefoot is like having your body teach your how to run – it’s a free coach that teaches you how to run well.

A Word of Caution

Before you ditch your running shoes for good, make sure to start slow. Lieberman suggests starting with barefoot walking, then slowing branching into barefoot running. Always be aware of where you are running or walking – broken glass, hot cement, and dog poop are ever-present dangers in the barefoot world.

And remember, treadmills are designed for runners using proper footwear. It is not recommended that you run barefoot on your treadmill. A great place to start is a large grassy park or along the beach – somewhere where you can feel comfortable and can practice running shoeless. Don’t forget to do some dynamic stretching to warm up, and don’t worry if your neighbors look at you a little funny – after all, Abebe Bikila’s competitors looked at him a little funny too when they were at the starting line in Rome. Then, he left them in the dust and won gold.

2 A Brief History of Barefoot Running

4 Pros and Cons of Barefoot Running