Run Your Way to a Younger Feeling You

Have you ever seen people who have clearly run all their life?  They show up to a race with silver hair, lean muscles, and all the confidence in the world.  Then, they take off like a rocket and seem to maintain their pace like they were channeling an inner “energizer bunny.” 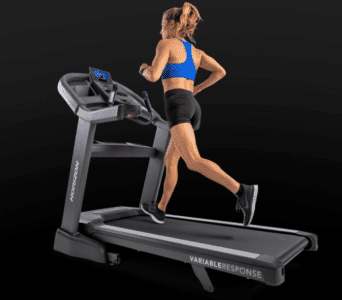 Well, some people really do just run all their lives.  And we’re learning that this habit may actually be doing their body a world of good.

That’s because running doesn’t just have physical, mental and emotional benefits.  It may actually help you SLOW your aging process.  If that’s not a great reason to power up your at-home treadmill, we don’t know what is!

A Study 21 Years in the Making

This news is the results of a study performed at the Stanford University School of Medicine that tracked 500 runners over the course of 21 years.

James Fries, MD, emeritus professor of medicine and the study’s senior author began the study, along with his team, back in 1984. At that time, many professionals thought that strenuous exercise could do more harm than good for elderly individuals. It was thought that the risk of orthopedic injury from running would be very high, with less chance of full recovery.

Fries had very different ideas. He believed exercise would extend the amount of time that a person could have high quality of life and live disability-free. His idea became named “the compression of morbidity theory”.

It’s very important to note that Fries isn’t saying running will make you live longer, but it would stave off the time of life when people aren’t able to do what they want to physically, on their own.

To see if he was right, Fries followed 538 runners over the age of 50, comparing them to a second group of non-runners with similar statistics.

During the 21 years that they participated in the study, each individual answered a yearly questionnaire about their physical ability to perform basic everyday tasks. This included things like walking, getting dressed and grooming themselves, grasping and holding objects and getting in and out of a chair.

With the ages of the participants, it was necessary for the researchers to utilize national databases to track people that had passed from year to year.

When the study first began, the individuals in the running group were clocking an average of four hours of running per week. Obviously this decreased with age, after 21 years they were down to an average of 76 minutes per week.

In fact, the onset of those disabilities for the running group was 16 years later, which is a very significant amount of time when you think of it in terms of maintaining your independence and the ability to live a full life without constraints.

According to Fries, “By and large, the runners stayed healthy.”

How to Live into Your Nineties

Staving off disability for 16 years is impressive in and of itself, but the researchers were surprised by how much more they found over the course of the study. They were pleasantly surprised to find that the increasing gap in health between the two groups continued to grow even as the participants were into their 90’s!

“We did not expect this. The health benefits of exercise are greater than we thought,” says Fries.

Fries and his team are fully aware that they can only see this gap grow for a certain amount of time. “We know that deaths come one to a customer. Eventually we will have a 100 percent mortality rate in both groups.”

And yet, over the course of 21 years of study, the results have exceeded all of their expectations. Running throughout life slowed cardiovascular deaths, which isn’t really surprising, but the team also saw fewer early deaths from cancer, neurological diseases and infections as well.

Dispelling Myths about Exercise for the Elderly

Another side benefit of Fries work was that his team was able to expose some strong held ideas about exercise among the elderly.

Many people, professional and otherwise, believe that running isn’t something that elderly individuals should try to do. The risk of injury and stress on the body is too great.

Fries and his team have shown that’s not the case. “Running straight ahead without pain is not harmful,” explains Fries. There was no greater risk of osteoarthritis in the running group and the runners did not need more knee replacements than the non-runners.

“When we first began, there was skepticism about our ideas. Now, many other finding go in the same direction,” says Fries.

There’s more to slowing the effects of aging than just avoiding disability. Running can actually slow your cells from aging by up to nine years.

Research performed at Brigham Young University revealed that running for 30-40 minutes a day for five days a week slows the cellular aging process.

This is done by reducing the shortening the telomeres in your cells. Telomeres are the protective caps at either end of you chromosomes, which store your DNA. Telomeres are biological age markers. As you get older, your telomeres naturally shorten. But when they get too short, they can’t protect the chromosomes and the cells then start to die. 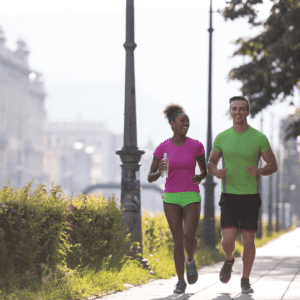 Prof. Tucker, of the Department of Exercise Sciences at BYU, measured the length of the 5,823 adults that were part of the study. He also looked at their exercise regimen over the course of 30 days.

We can really use the information gleaned from these studies as some serious motivation. We know that exercise is good for us, it’s even better for us inside and out than we thought. Your cells stay younger on the inside and you’ll feel younger for longer on the outside.

Now, get out there and start moving!