Getting the right treadmill for your body and budget!

Use Treadmills to Train for Ultra Marathons

Last Updated on September 14, 2017 by administrator

She Just Finished Her 13th Ultra-Marathon at a Race Distance of 70 Miles! 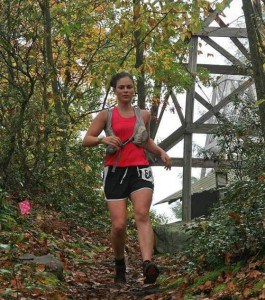 During the event,the 130 participants experienced high humidity,deep sections of mud, and pouring rain. Despite the obstacles, Kristen Mam finished under her nineteen-hour goal as the tenth place woman finisher. Many people would think she’s crazy….

For most, the thought of running a marathon at just 26.2 miles is an extreme endeavor. Now imagine multiplying that distance by three. Join us as we take a look at ultra running and explain a bit more about the motivation and perseverance needed to happily run thirty, fifty or even one-hundred miles in a single race.

As a teen and young adult, Kristen had no desire to run long distances. Eventually, the running bug hit her and she began to train and ultimately complete her first marathon in November of 2006. When her friend asked her to pace a thirteen-mile section of the Laurel Highlands Trail Ultra Marathon in the spring of 2009, she was introduced to a whole new world of running. “I was scared out of mind at the start, but by the end I decided I wanted more,” she shared. “A month later I submitted my application for the JFK 50-miler that November.”

What is an Ultra-Marathon?

An ultra marathon is any race that goes beyond the marathon distance of 26.2. There are a wide variety of ultra races throughout the world covering some of the most diverse and beautiful terrain our planet has to offer. Some of these races, like the Badwater 135 in California, are run primarily on the road.  Road races can be difficult to plan because of the logistics of blocking traffic over such a long distance. As an alternative, most ultra marathons are run on trails where participants can enjoy beautiful scenery and a more-forgiving natural footing. This also comes with rocks, roots, and other obstacles just waiting to twist ankles and knees.

There are two types of ultra marathon events – those based on time and those based on distance. For a timed event, runners loop a set course for 4-72 hours with the win going to the runner with the greatest number of miles. Kristen once participated in a twelve-hour event with a five-mile loop several years ago. “It was interesting. I liked being able to come back to my little camp every hour and get what I needed, but it got a little boring after a while.”

The more common type of ultra marathon is a distance-based race where runners attempt to complete a course within a certain time frame. The typical distances are 50K (31 miles), 50 miles, 100 K (62 miles), and 100 miles. Kristen loves the variety in her sport. “There are races of 200 miles popping up throughout the US, as well as races that traverse the Sahara and other natural landscapes,” she explained. “If you dream it, it can be run on foot!”

During such a long race, it is understandable that ultra runners deal with some  unique physical challenges. They are in constant risk of taking a misstep that could end it a rolled ankle, fall, or worse. This risk is elevated for those who enter into events without the proper conditioning. During the race, they also must deal with chafing, blisters, and the need to stay properly hydrated and fed during an effort that may take over 20 hours to complete. Some runners get too cold or experience a “fuzzy” sensation due to an electrolyte balance. Others experience blisters underneath their toenails that cause the nail to fall off. 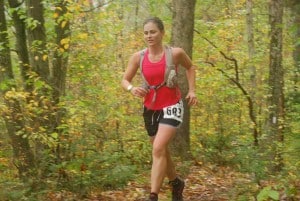 Ultimately, correct preparation, proper hydration, and adequate calorie intake during the race make a huge difference in a runner’s performance. Kristen explained, “It’s hard to figure out how to deal with all of those issues. It completely depends on the individual. What works for one person will not work for the next.”

Ultra races are usually divided into 5-8 mile legs with aid stations separating the sections. These aid stations often have a huge assortment of food like watermelon, oranges, strawberries, potatoes, and sometimes even beer! All of these foods are provided so that the runners can ingest enough calories to get them through the race. What each runner chooses to eat varies widely. Kristen knew one runner who could scarf down a McDonald’s value meal mid-race! Personally, she doesn’t eat much at all but instead depends on a nutrition powder that is mixed into her hydration pack to provide a constant source of electrolytes and calories during the event. Any additional food provides bonus calories. She explained her favorite; “I have to say that boiled potatoes rolled in salt during an ultra is like heaven.”

How Do You Train for an Ultra-Marathon?

For Kristen, mental and physical preparation are tied very tightly together. If she knows that she has taken all of the correct steps to prepare her body during the months leading up to a race, she knows that her mind will provide the strength to make it through.

She runs 4-5 days per week on the trails on the mountain near her Harrisburg, Pa home. As a stay-at-home-mom, she has some trouble finding free time to make it onto the trails and exclaimed, “Strollers don’t work on trails!” She makes it work and runs 6.2 miles on Tuesdays and Thursdays with another run on Wednesdays. Her weekly long run is on Saturdays and consists of anywhere from 10 to 40 miles depending on her training schedule. On Sundays, she fits in a middle distance run of 7 to 20 miles. On top of the running, she strength trains three days a week, attends a workout class once a week, does yoga, and takes lots of walks with her family.

All of this preparation provides her with the confidence she needs to tackle the big event. During a race, Kristen focuses on the individual segments of distance between the aid stations. “I break the race down into mini-races. I just focus on getting from aid station to aid station.” During these breaks, she is often greeted by her friends, husband, and young son who are there to cheer her on. “You can’t imagine how much energy you can absorb from those few minutes of support and human interaction.”

In the winter months when extreme cold, wind, and ice keep her off of the trails, Kristen likes running on the fancy TV connected treadmills at the gym. “I like a treadmill to have a lot of cushioning and to feel smooth. I really hate getting ones that feel old and clunky.” If you are looking for some of the best treadmill reviews so you can start training for your ultra-marathon, be sure to check out the rest of our site.

The ultra community is small and supportive. Kristen can pretty much guarantee that she’ll know someone at every race she runs. Sometimes a runner will only finish because they meet up with new friends during the race who band together for support and pacing. “I only finished my first 100K because I met two runners, PJ and Ally, and we stayed together for almost 30 miles,” she explained. “We became a team, in a way.” 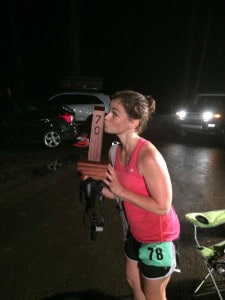 When asked about her proudest moments with ultra running, Kristen had two races in mind. In 2012, she managed to complete her first attempt at the 100-mile distance despite badly twisting her ankle on mile 10. She still finished in 29.5 hours.

Her second great success came just this last weekend with the Laurel Highlands 70 miler. She had an extremely difficult last year, losing her mother to a rare form of breast cancer. She also battled injury after injury in the months leading up to this race leaving her feeling extremely unprepared. While many would have pulled out of the race, Kristen was determined to participate in at least the first 19 miles since she was running this as part of a relay team. After this leg was complete, she felt able to continue and eventually finished the entire 70 miles. It was just the most recent of many great successes for a woman who admits she used to hate running.

Are you over the age of 40 years?  Learn how to get rid of stubborn belly fat.